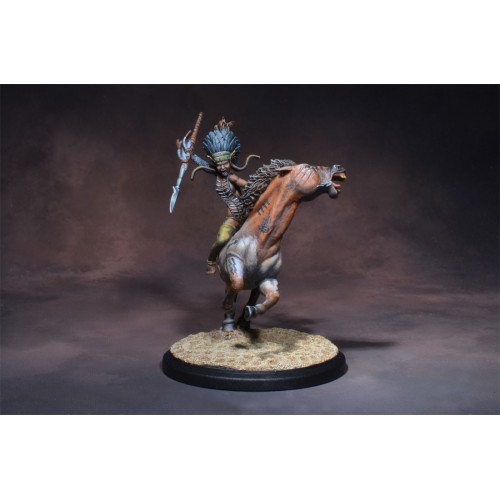 Despite her heroic victory, Hroka’s tribe was forced north and east, and eventually absorbed by treaty into the very clan that had claimed the lives of her father and brothers. Unable to bear the sight of most of her new clan, Hroka wandered eastward along the lakes with her brother’s spear and her brave husband’s horse. Her solitary sojourn ended when she came upon a trading settlement and discovered the arena.  Seeing the way the gladiators toyed with their opponents and counted coup against them, and hearing tales of great games given in funerary celebration, she knew that the rest of her life would be a series of battles for the glory and honor of her own dead.

Caho-Ta is a Beast. Beasts may be included in your cohort normally or may be placed in the arena as a living hazard.

The resin Caho-Ta miniature is supplied unassembled with an optional riding Hroka, alongside a plastic 50mm Arena Rex base, activation token, art card, and game card.