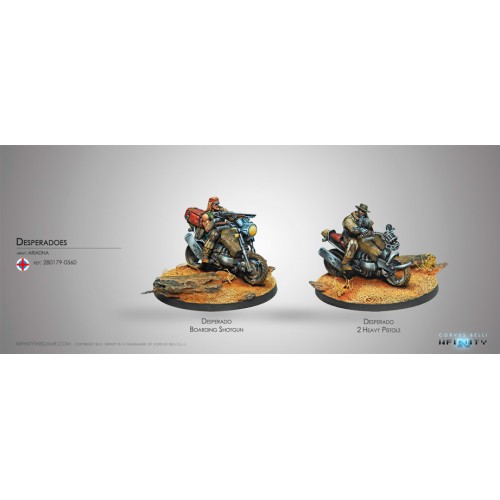 Wild and violent groups of Antipodes infest the Southern region of USAriadna, and what is the local authorities' solution? To send a group even more wild and violent to put an end to them. Very well, and when they have done it, who will free us of these Desperadoes?

The Desperadoes are a border security force, comprised of killers and gunmen who operate outside the Constitutional restrictions regarding the use of force. All of this began with the brutal incursions of the Antipode warrior nomad tribes through the Southern border of Jackson. In order to control them without having to resort to the federal Army, the state government established the so-called "Blood Contracts Law," better known as the "Scalp Law." With this they offered large sums of money for the death of Antipode warriors. They asked for only the hairy leather scalps because of the complexity of transporting the heads or bodies in varying states of decay across the frontier desert during the long weeks of a hunt.